SANCO test detects trisomies and monosomies of all 23 chromosome pairs as well as deletion and duplication syndromes of at least 7 million base pairs. There are more 430 different syndromes, including the most common ones, such as Down's, Edwards' and Patau's syndromes. Thanks to this, the scope and resolution of the test is comparable to the karyotype from the amniotic fluid (after amniocentesis). The SANCO test has the widest scope among the NIPT type tests available.

TYPES OF CHROMOSOMAL ABNORMALITIES DETECTED BY THE SANCO TEST: 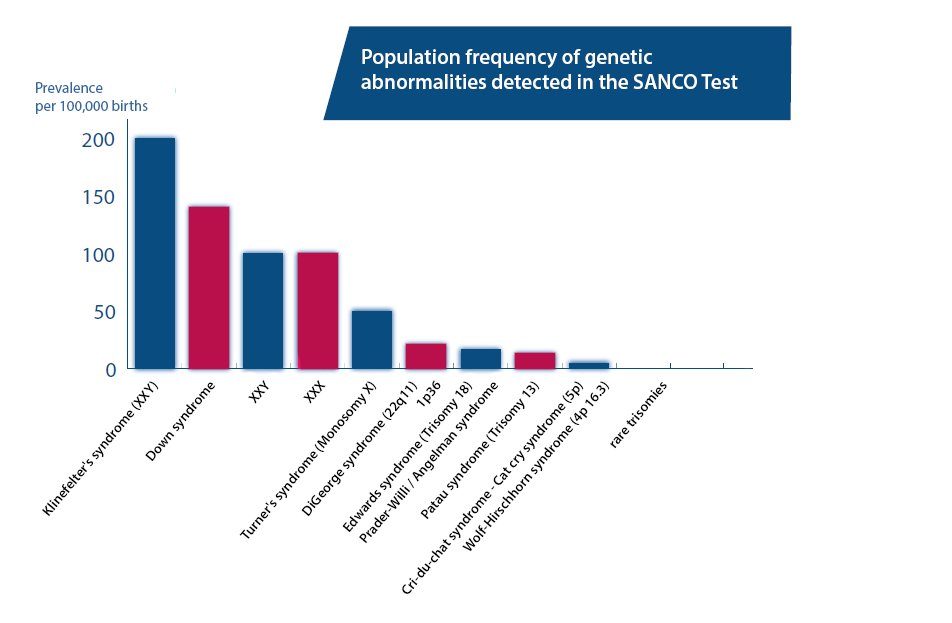 There are 46 chromosomes in the human genome what makes up 23 pairs. Trisomy is a medical term used when an additional chromosome in a cell occurs. Trisomies appear randomly, but the risk of their occurrence increases along with mother’s age. Trisomies of chromosomes 21 (Down syndrome), 18 (Edwards syndrome), 13 (Patau syndrome) are the most frequent syndromes of congenital malformations caused by the presence of additional copy of chromosome. They are responsible for the occurrence of dysmorphic traits, congenital malformations and varying degrees of intellectual disability of the child. Trisomies of chromosomes with other numbers cause severe fetal malformations, leading in most cases to miscarriages in the first trimester of pregnancy.
Prophylaxis of trisomy is impossible.

An additional copy of chromosome 21, causes Down syndrome, which is the most common trisomy and the most common genetic disability. In the group of people with Down syndrome, there is an increased risk of: congenital heart defects, cancer, hearing and vision defects, immune disorders and digestive system disorders, physical growth delays, mild to moderate intellectual disability. The final stage of development and comfort of a child with Down syndrome can improve the actions already initiated in early childhood, i.e. proper medical care, acceptance and involvement of the family, as well as education and vocational training. However, there are some physiological and genetic limitations that can not be overcome.

Due to multiple birth defects, approximately 95% of fetuses with trisomy 18 undergo spontaneous miscarriage. Live births occur approximately once every 6,000 births, but only 10% of children survive 1 year. The frequency of Edwards syndrome increases with mother's age, such as in Down's syndrome; Edwards's syndrome is four times more likely to affect girls than boys. A child with Edwards syndrome is much smaller than a healthy newborn baby. The functions of many systems, such as respiratory and circulatory system, are disrupted, heart defects are common, as well as umbilical hernia and inguinal hernia; the undescended testicles occur in boys. The child is generally unable to eat on its own, so it must be fed with a probe or a gastrostomy (a fistula leading directly to the stomach). Children, even if they survive for more than a year, are not able to walk on their own, and their cognitive and communication skills are very limited.

It occurs with a frequency of 1 in 8,000-12,000 births. The risk of having a child with this syndrome increases along with the mother's age. In many cases, the baby dies before reaching full term or is dead at birth. If a child is born, progressive impairment of its development is observed. Symptoms of the disease are most often seen in the prenatal period or just after the birth of the child. The nervous system and circulatory system are most often damaged. Cardiac dysfunctions occur in the form of a defect of the interventricular septum and / or atrial septum, as well as the changed position of the heart (it is inverted to the right side of the chest). Often, the brain does not divide properly into the left and right hemisphere. This leads to the severe neurological disorders.

Aneuploidy is a more general term than trisomy, which indicates an abnormal number of chromosomes - in humans other than 46. Aneuploidies other than trisomy 21, 18 and 13 are so severe that the presence of either of them almost always causes a miscarriage during the first trimester of pregnancy.

SANCO screens all of 23 pairs of chromosomes. If the test shows a high risk of rare aneuploidy, only in about 10% of such results further diagnostics will confirm fetal disease, mostly in a mosaic form, i.e. only in part of his cells. The clinical consequences of mosaicism are difficult to predict because they will depend on the number and location of aneuploid cells.

In most cases, a positive result for a rare aneuploidy will be due to confined placental mosaicism CPM. Such condition, despite a genetically healthy fetus, can cause a number of pregnancy complications: Intrauterine growth restriction (IUGR) and low birth weight, pre-eclampsia in a pregnant woman, and even fetal malformations or a miscarriage. Rare aneuploidy is found once in several hundred results, but in the high risk group, with disturbed levels of βhCG and PAPP-A protein, even one out of every hundred patients tests positive.

Sometimes an abnormal number of chromosomes in a cell, especially involving several chromosomes or involving only chromosome fragments (deletions or duplications), is not due to the child's disease or its placenta, but is a signal of developing a cancer.

Large deletions and duplications of genetic information may arise randomly or be the result of carrying a balanced translocation in one of the parents. Parent's age does not affect the risk of their occurrence. Certain gene regions are more vulnerable to this type of damage than others, which is why we know a number of specific genetic diseases that are a consequence of deletion or duplication, but damage can affect virtually any place in the genome.
Symptoms of the disease are due to the lack / excess of specific genes located in the deletion / duplication region; the irregularity can affect from tens of thousands to tens of millions of base pairs (Mbp), or letters of genetic information, of the 3 billion that make up the human genome. The SANCO test covers changes of at least 7 Mbp.
Chromosome 21, the smallest human autosome (i.e., a chromosome other than X and Y) is approximately 40 Mbp (40 million letters) in size. Therefore, the SANCO study 'reviews' the fetal genome with a fairly high resolution (greater than the resolution of the prenatal karyotype). The SANCO plus test covers, however, 5 defined deletion sets, of which 3 (deletions 22q11, 4p16.3, 15q11.2) may be caused by damage less than 7 Mbp.
Most of the pregnancies with deletion / duplication syndromes will last until delivery, but children show varying degrees of developmental disorders.

Deletion of the part of the short arm of chromosome 1; typical symptoms are: hypotonia, congenital heart and other organs defects, hearing impairment. In most cases, a developmental delay and a different degree of intellectual disability are observed.

It is also known as the 5p deletion syndrome. Children with this deletion are usually characterised by: low birth weight, smaller than usual head circumference, decreased muscle tension and moderate or significant intellectual disability. Feeding and breathing problems are common. Due to the incorrect construction of the larynx and vocal cords, infants with this syndrome often cry making characteristic, high and monotonous sounds that may be compared to the sounds made by a cat.

The 16p11.2-p12.2 microduplication syndrome is a rare syndrome resulting from partial duplication of the short arm of chromosome 16. The disorder has a highly variable phenotype, typical symptoms are: delayed psychomotor development (especially in speech), intellectual disability, autism spectrum disorder and / or obsessive and repetitive behaviors, behavioral problems (such as aggression and outbursts) and dysmorphic facial features. In addition, finger and hand abnormalities, short stature and microcephaly are often described.

This relatively common syndrome (1:10,000 births) is the result of partial tetrasomy within chromosome 22 and is characterized by a very variable clinical presentation. Most affected patients have many malformations of the organs of vision and hearing, heart, kidneys and anus. The intellectual disability is usually mild. The life expectancy is generally not significantly reduced, except for children with severe defects.

A rare syndrome resulting from the partial deletion of the long arm of chromosome 2 with a highly variable phenotype. Typical features of the disease are intellectual disability, moderate to severe developmental delay (particularly speech), feeding difficulties, hypotension, thin and rare hair, various abnormalities in tooth development, and cleft lip and palate.

WHY
SANCO™?
TEST RANGE
INDICATIONS
FOR
THE SANCO
TEST
COMPARISON
WITH OTHER TESTS
TECHNOLOGY